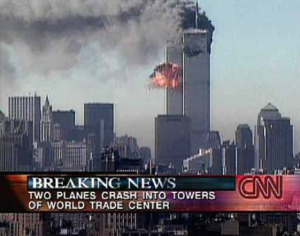 The events of September the eleventh have, even ten years later, remained as potently polarizing as they were on the day the planes flew into the towers. I don’t know if you remember exactly what you were doing when you heard the news, but I doubt you just carried on doing it. The news today is so relentless and full of alerts, breaking stories and puffery that I cannot recall any other single event in the last ten years that even comes close to the magnitude of what happened on that fateful day in New York, Pennsylvania and Washington. It doesn’t feel like it was ten years ago either.

I remember where I was, what I heard, then saw and how I felt when it all happened. I remember everything with razor-sharp clarity, and I can still summon up the emotions that welled in me when I went to bed that night. You don’t have to be a New Yorker or an American to understand why I wasn’t the only one.

I first heard it on the radio, while I was driving home – I had done the morning show on 702 that day and been for lunch with Thabo Modisane and Rina Broomberg at a hotel in Sandton. I dropped them off at the office and turned up the radio as I passed the Woodmead offramp on the N1, heading north. I heard Jenny Crwys-Williams on 702 saying that a plane had flown into one of the towers of the World Trade Centre. It sounded preposterous, and even she sounded unsure of the seriousness of the story. There was a lot of speculation about whether or not it was a small plane and there were too few visuals at the moment the story broke to give any indication of the scale of the event. It immediately crossed my mind that it might have been some kind of terrorist attack, but it sounded like a minor, though unbelievable story. I was painting pictures in my head of some kind of Cessna bouncing off the side of the WTC and folding, tumbling to the ground below. I had been up to the top of the South Tower almost exactly one year before, on my first ever trip to New York. Those buildings were fantastically big, strong and imposing. They were made of steel. I couldn’t imagine a little plane doing any real damage.

Moments later, as I drove under the Allandale bridge I heard enough in the tone and content of the breaking news report to realize that something quite monstrous had been and was unfolding. I know all the cliches about blood running cold, spines chilling, pulses racing and adrenal glands pumping – but I can honestly say that all my own peripheral thoughts subsided. I was emotionally reeling when I heard them describe a second plane hurtling into the other tower. There were gasps and stammerings, a choke of pain in their voices, and that radio silence that betrays more than all the words that could fill the space. All too quickly, I had an idea of the enormity of the drama taking place, and it focussed my attention on what this meant, what would change, how things would be different for all the world. I tore down my parents’ driveway, burst through the door and turned on the TV. My mother was home and she and I watched the live reports, the repeat footage of planes smashing at great speed into buildings. We didn’t say much for the first few minutes, then I quietly went into another room and sat down, on my own. Without realizing it, I had experienced a visceral reaction to what I had seen and heard, and I felt nauseous. Anyone who knows me will tell you that I’m not a melodramatic guy. I don’t like public displays of emotion and am rarely swept up in either euphoria or grief. Right now, just writing this, I can feel my stomach tighten.

I knew on 9/11 whose side I was on. I knew that whoever committed the acts of terrorism was declaring themselves an enemy of freedom, civilization and humanity. I knew those people were my enemies. I still feel that way.