You and me baby, ain’t nothing but mammals – so let’s do it like they do on the Discovery Channel. 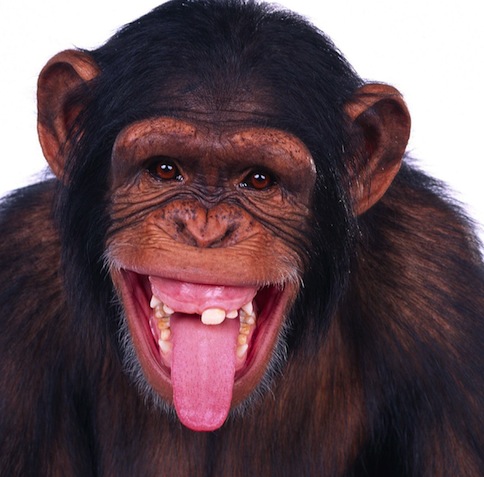 We can’t be civil with each other so it’s no surprise that humans struggle to find compassion to treat any animals, even our closest relatives, decently. It may, in fact, be argued that we’re very much nastier to chimpanzees, gorillas, monkeys and baboons than we are to other animals – perhaps because to those of us insecure about our common ancestors, they mockingly display how lowly our origins might be.

I spent a day last week at Chimpanzee Eden in Mpumalanga – a place that rehabilitates these poor, endangered cousins of ours from maltreatment and extermination. You should go there, just to meet one creature in particular.

Cozi is 15. He has expressive, but chaotic eyes and a good coat of lighter hair. He comes from the Congo. When I first saw him he sat at the fence, swaying his head from side to side, like an unsure Bollywood dancer. He opened his mouth and stuck his tongue all the way out and rolled it back into his mouth, looking up at the sky in a deranged, distracted way. He watched us for a while, then forgot we were there, then saw us again, and made displays of power and authority –just in case we thought we were the leaders of his cartload (no, that really is the collective noun for chimpanzees). He was different. The other chimps tolerated him – with the exception of the alpha-male, Zac, who needed to remind Cozi (quite frequently) that he was in charge, because Cozi couldn’t remember that it wasn’t him. This was done with violence and noise.

Cozi is a special-needs chimp, to put it mildly. He spent the first years of his life in a research facility in America, having all manner of hallucinatory and mind-altering substances tested on him. After that, he toured Italy with a gypsy as a trickster, pointing at different parts of his body when prompted for the amusement of an audience (the collective noun for us) of humans. When he got it wrong, Cozi would be thrashed on the head, further pulverizing his already damaged brain. He’s like the crazy grandmother, drunkle (drunk uncle) or eccentric relative we all have – and just like the stranger members of our own species, he’s a lot more interesting than the normal ones.

Whether you look at the best or the most vulnerable members of an animal, and especially primate society, you cannot help but think of how far we still have to go as the most successful (and lucky) of the animals on earth. We have made great strides to overcome the inconsequential differences, arbitrary prejudices and artificial inequalities we imposed on our own brothers and sisters. How much more must we evolve before we can overcome the stupid delusions of superiority we imagine we have over other species? If the evolutionary tree had shot off in a different, random direction, it might be us who were put in the laboratories of another species, or beaten on the head when we failed to point to our noses.

There is a curious species that looks very similar to the chimpanzee – they’re called bonobos. Bonobos are led by alpha females – chimpanzees are ruled by males. Chimps solve their problems by violence – bonobos by having sex. Chimpanzees mate infrequently from behind, bonobos do it facing each other – and often. Chimp babies are born with pale skin which turns dark with age, bonobos are born with dark skin and red lips. If you’re a bonobo you make A and E vowel sounds, chimps make noises with O and U vowel sounds. Of all the animals on earth, these two species are our closest genetic relatives – and the gap isn’t very wide. If we’re the superior tribe we have a funny way of showing it.

Find out how to adopt, volunteer and donate to Chimpanzee Eden at http://www.janegoodall.co.za/