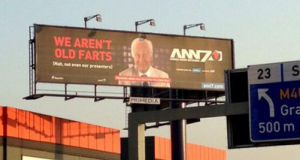 ANN7 will have the best ratings of any local news channel for the past two weeks, but not for many weeks after. Everyone is talking about them, and that’s great for ratings – even if they’re laughing. Nobody is talking about the professional, seamless job Peter Ndoro does on the 24-hour SABC channel or how great Iman Rapetti is as a news anchor. Nobody cares about them.

When people on the street talk about ANN7, they call it the ‘Gupta Channel’ or ‘that news show where none of the presenters seem to know what they’re doing’. Nobody has been very sympathetic, optimistic or complimentary. You don’t have to be, and I don’t want you to feel bad:

Schadenfreude is partly to blame for the thrill that ANN7 provides – because most people are horrible, and take pleasure in the problems others encounter – if only because they don’t have to encounter them themselves. Every time a newsreader slips up with a name, the control room goes on air, or some poor bewildered young girl stares doe-eyed at the camera hoping for someone to save her from an autocue that has rolled past; we laugh mockingly, somehow imagining that we could do a better job.

I remember listening to radio when I was a child. I waited for those occasions when the ‘announcers’ – as they called themselves, screwed something up – dropped a tape, scratched a record, left a microphone on or broke down on air. It hardly ever happened, but when it did I loved it. It was so real. In some ways, those unpolished disasters made radio accessible, and radio wasn’t as real then as it is now. It’s worth noting that eventually radio became so real that it changed all the other media and even gave birth to Reality TV.

TV News people are always so smooth – they’re dressed up, made up, with perfect hair and perfect teeth. They can pronounce difficult Russian names, seem to know all about what’s going on in the world and make us feel that nothing could be so dramatic or disastrous that they wouldn’t be there to tell us about it every night at the appointed time. They’re a part of our lives and we end up having a relationship with the best ones.

ANN7 is to be commended for giving a break to the young guys and girls who want to be broadcasters – but some of them don’t care about broadcasting, knowing and communicating the news to us or forming a relationship with their audience. Some just want to be on TV, like a whole bunch of the Idols contestants I get to see year in, and year out. Broadcasting is tough. You have to work hard at it. If you’re lucky and you don’t give up, you might be good after about ten years. Before you get to ten years, other people have to support, coach and believe in you enough not to fire you.

There are millions of people who sit at home watching TV, or listening to radio who say to themselves smugly “Oh, I could do that!” The truth is that you couldn’t. The best people are really talented, driven and need experience. Just because they do their jobs so publicly doesn’t mean there isn’t a lot that goes on behind the scenes. You’re not an expert on TV or radio just because you listen to it or watch it. Most people couldn’t do what the best in the business do with such ease that it looks simple. Like the duck floating on the surface of a pond – all the hard work is going on below the surface.

ANN7 has shown just how tough a real broadcast is to pull off. We may laugh, but they’re ordinary real people, and this is what happens when reality TV crosses into The Newsroom.