I’m a white guy and I’m mindful that I inherit a system biased in my favour, but I’m also a passionate South African – and have been outspoken on matters to do with the country because I care so much.

I’m not a member of any political party. The only membership I have is of the Mamelodi Sundowns fan club, which I joined when I was 15. In 1994, I was still at school and too young to vote. Since the General Election of 1999, I have only ever voted for the ANC – with the exception of one election where I wasted my vote on COPE. I kept voting ANC, even when I became disillusioned with the President and the executive – mostly because I believed in what the ANC stood for.

Over the years I have taken a lot of abuse for my views – I’ve even received death threats. I’ve always regarded this as an exercise of freedom of speech – in a country where freedom of speech had not existed prior to 1994. In the light of #Sparrowgate and the ensuing controversy, I have come to understand that what I have been tolerating is hate speech.

On Sunday night, a South Coast Estate Agent that nobody cared about called Penny Sparrow, wrote an odious social media post about crowds of black people on beaches – comparing them to monkeys. On Monday morning I dealt with this on my show on Cliffcentral.com, and unequivocally condemned racism.

Later that morning, someone tweeted a poll asking people for their opinions on freedom of speech – to which I replied “People don’t understand free speech at all.”

Having already discussed it on my show, I wrongly assumed that we were all already in agreement that you can’t stand up for racism

@Wamotsibah773 responded: “Are you a racist as well? Or are you one of those who think there’s a beta skin colour than the other?”, to which I responded: “Don’t be so linear. You insult your own intelligence. This woman is an idiot and a racist, but I believe in freedom of speech.”

This was the source of unrelenting anger, name-calling and death threats against me that ensued as the message became more and more lost in the shitstorm.

Read it again and assess for yourself whether such a disproportionate outrage is called for.

Calls to boycott me and even the TV show Idols came in the wake of this lynch-mob that directed their fury at me. In an effort to clarify things, I apologised for the confusion, which sadly only led to more vitriol.

Here is the apology: 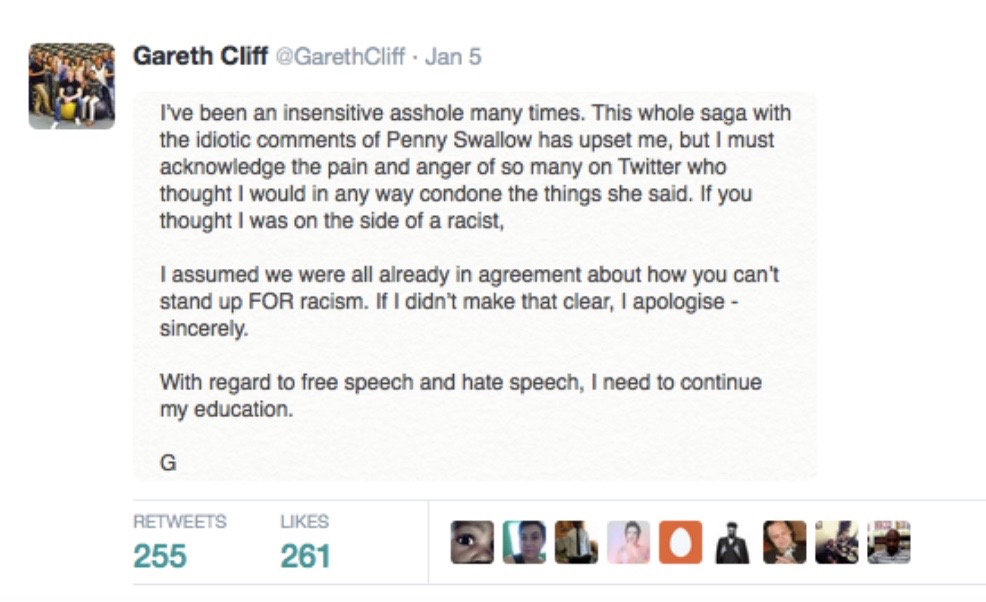 I certainly appreciate the need to obtain greater clarity on what the limits of free speech and the parameters of hate speech really are. I’m also grateful that people like Pinky Khoabane, Sizwe Dhlomo, Professor Jonathan Jansen, Advocate Dali Mpofu and DJ Fresh sought to constructively engage me on the matter. We all know that there are blurred lines in the sensitive context of race relations in South Africa.

At this moment, I feel disappointed in how the conversation sometimes gets hijacked by angry and emotional people on Twitter, who have no desire to add value. We should not be deterred from continuing the discussions we need to have to build a better South Africa.

When the dust settles, I hope that we can engage constructively – tell our stories, share our ideas and LISTEN to each other. Don’t be bullied. Don’t tolerate racism. Let’s keep talking. 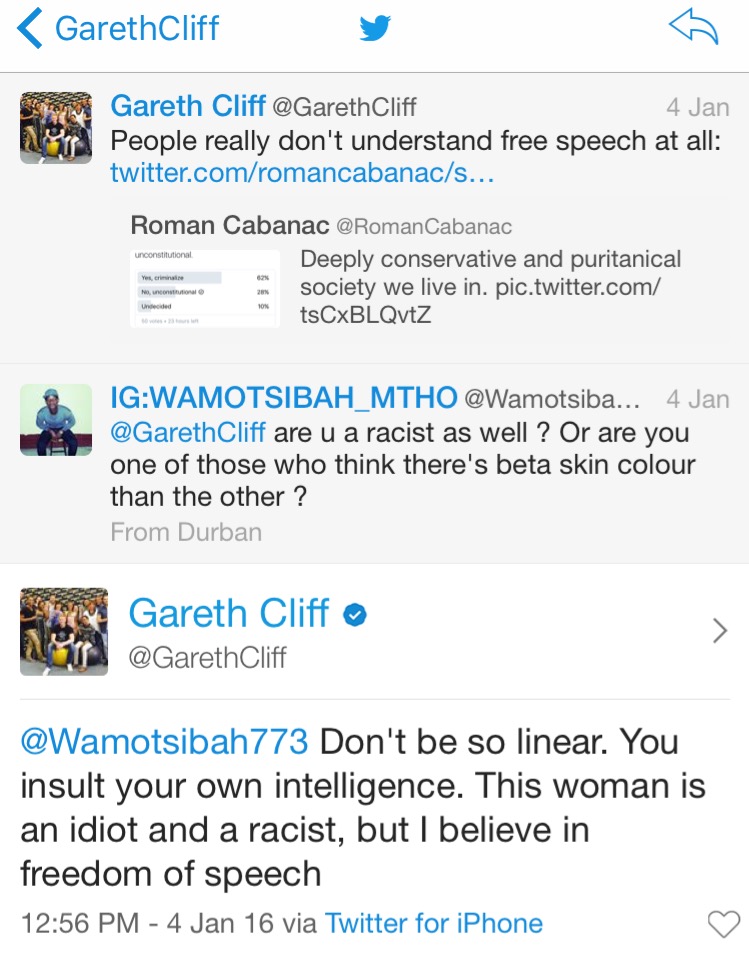