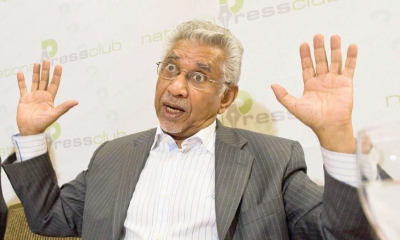 We’ve moved on and accepted that our government are trending the same way as our oppressive former government went. And who can blame them, it’s the only example they’ve had a close personal experience with. So increasingly we must be on our guard as they attempt to whittle away parts of our sacred constitution that guarantee individual freedoms over state concerns. The great new struggle will be against the tinkerers and reactionaries who wish to curtail our purportedly inalienable rights. I have a proposal for government: Why don’t you try out your bright new ideas on yourselves first, see how it goes, and then bring the rest of us under the hammer? In the same week that the salubrious Mac Maharaj scrambled unconvincingly to hide his own secrets, we were told (no doubt with at least a few awkward gestures) that the secrecy bill was intended for matters of state security only, not to hide things we deserved to know about. Let us not forget that the very organs of state security that would administer these vital bits of info were used as weapons in the Mbeki/Zuma struggle for power approaching Polokwane. State secrets seem to refer, in the current kleptocracy, more to those things we’d like to keep for blackmailing each other, rather than let the media tell you about. In other words, we’ll not only decide what you should know, but we’ll decide what nasty things to threaten to use against each other to keep rebellious cadres disciplined. Under the State protection of Information Bill, we’d never have known about Mac’s shady arms dealings… Stalin used to make his secret services gather information, not just about the enemy, but also about the closest of his comrades. He rewarded agents who brought him tales of sexual misadventure, family arguments, miscarriages, personal health problems and other titillating, but private detail. He would then, unscrupulously utilise this information to enforce absolute authority among the ranks. Much of his unadulterated power was amassed by shakedown stories of adultery, inter-alia. In modern, open democracy, this sort of threat is regarded not only as in poor taste, but also as unlawful. Using illicitly obtained information to exact something privately from someone is called extortion. It is completely illegal. The problem with people in politics is that extortion is just another tool of the trade. Actually, I shouldn’t call it a trade since the ugly business of politics is not a voluntary trade from the point of view of the citizen at all. The politicians have no qualms about using every soiled piece of dirty laundry to make their own curtains from. State agencies become haberdasheries for this conversion. Secrets are complicated things to keep. Like white Phosphorus, which must be kept under water to prevent it from reacting with air; or Potassium, which must be stored under naphthalene to keep it from the same, secrets are wont to react. Protection of Information may be a third “P”, even more reactive than the former two elements. Secrets will find a way of coming out – and if an entire state department knows, someone will eventually tell someone on the outside. Then your game is up. Julian Assange embarrassed governments and powerful individuals the world over recently when he published their secrets on the internet. Wikileaks laid bare the complicated dance of diplomacy as a simple battle of egos, a constant jockeying for position and a collection of howling schoolyard put-downs. The world of diplomacy was revealed for the duplicitous farce is always was. Churchill’s ‘Jaw jaw’ had become a hostile game of brinkmanship. Perhaps it had always been that. The point is that the truth came out. The collective efforts of the world’s most powerful governments couldn’t stem the tide. A talented nerd on his laptop in his mother’s bedroom can dig up the juiciest state secrets with a few lucky breaks and a skill for hacking. No law can prevent that, and any government who will try show only contempt for their people and an ignorance of modern communication. State Information? Secrets? Privileged, classified, “Need to Know” clandestinity? Bring it on. The last laugh will be on you.