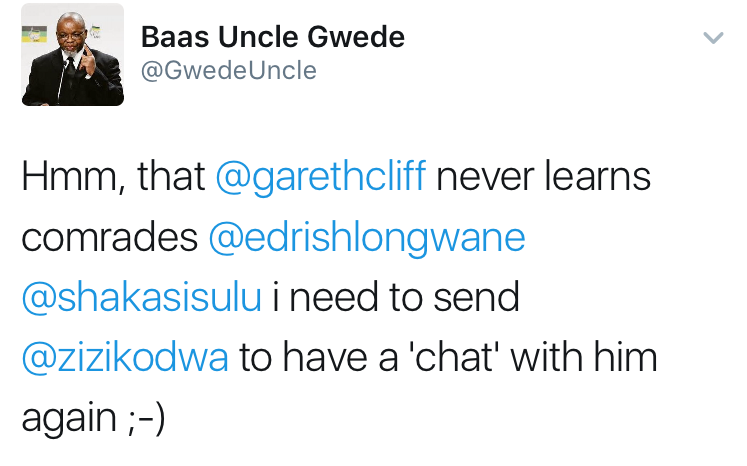 This week saw the unwelcome (to Zizi Kodwa and company) revelation that the ANC’s “Paid Twitter” tried to influence and mislead people during the municipal elections in 2016, and possibly in other ways too.

To many people who aren’t among the 2-3 million active Twitter users in South Africa this won’t matter at all, but even if you don’t engage on social media, it is the new battleground for politics, social justice and ideas. A lot of the most skeptical people in society will tell you that if you believe everything you read, you deserve to be confused. It’s becoming a lot harder to ascertain what’s true and valuable in a 21st century world.

2016 was all about racial conflict and division, with political parties and leaders tearing each other apart. Race, gender and sexual orientation became everyone’s weapon of choice in the zero-sum game of destroying reputations and showing everyone else what a good person you are. Who knows, in the light of Paid Twitter, how much of it was true? Certainly there was no winner – in fact the ANC demonstrably lost.

The first time I suspected there was more to it than meets the eye was when I was axed from Idols in January last year as a result of the reactions on Twitter to my tweet: “People don’t understand free speech at all” during the Penny Sparrow debacle. The racist vitriol that was unleashed on me took a heavy toll and our young business was under serious threat. My manager did a thorough analysis and identified a group of antagonists that suggested a more coordinated approach – she even called it sinister. Turns out she was exactly right. There were a dozen or more of these agents, and we even had confirmation of something in the shadows some months later. As of this week, the whole rotten enterprise has been laid bare – and the chickens are coming home to roost.

While the year saw a lot of figurative online bloodshed, the Institute of Race Relations insist race relations are good, and that most people (85%) believe we need each other to succeed and prosper. The real challenge in 2017 is going to be figuring out who you can trust, what’s credible and what people really care about. Trending topics on Twitter come and go – what matters today is no longer important tomorrow, and that was true even before Twitter came along. But with the reality of cynical paid campaigns and bought influence, we must be careful not to be swept up in manufactured outrage and fake news.

When Shaka Sisulu says something now, we may side-eye him rather than retweet him. Even so, being reactive isn’t going to take you all the way. Unfortunately the buck stops with you: You need to be acutely aware of bias, open to ideas that don’t support your point of view and willing to read a lot more material than the 140 characters in a Tweet. If you aren’t prepared to do those things, get ready to be led down the garden path. The tendency to fall in with Group Think is also strong – and as we discussed on my show this week, people who lack self-confidence and desire to belong to a group will sacrifice their own rigorous intellectual conclusions to the opinion of a mob, if it means they can stay in the group.

First principles. Sources. Relevance. A while ago I said everyone is a broadcaster – now you also have to be your own editor. Mute the scurrilous agents, block the instigators and recognise the signs that you’re being played. While social media have in so many ways liberated us, they have exposed us personally and intimately to some very dangerous influences and influencers.