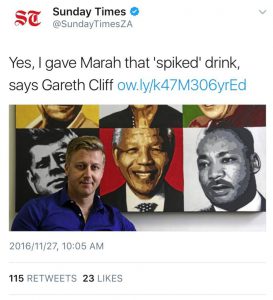 Last Sunday I finished my last season as an Idols judge. I intended to leave on a high note, having completed a terrific trip to New York with ProVerb and the Top 4 Idols and a record-breaking season. The finale should have been about the winner, Noma, and the audience who love the show. The Sunday Times had other ideas.
On Sunday morning the day of the Idols finale, I woke up to the news that “I gave Marah that ‘spiked’ drink, say Gareth Cliff”. Can you imagine – a false headline, focussed on a non-story from 6 seasons before, on the day we were about to finish a monumental eleventh season of this hit show? I was furious.
I’m used to newspapers getting it wrong, twisting a line out of context, concocting a provocative headline to sell enough of their papers to stave off the inevitable decline of profitable print media. But this was outrageous. That headline made it sound like I was admitting to a crime. The article itself was full of factual inaccuracies that the Sunday Times have since admitted to. Here’s an extract from the reply Susan Smuts, Managing Editor of the Sunday Times sent to my lawyer, Eric Mabuza:
“Thank you for your letter dated November 28 2016, which was forwarded to me today. We concede that the subheading and the second paragraph misinterpreted what your client wrote in his book.In particular we concede that your client did not write that he had cost Ms Louw her job or that he poured her a drink of vodka.”
Misinterpreted? Either I said it or I didn’t. I didn’t, so there’s no interpretation necessary. What the Sunday Times unleashed was a tirade of hysterical accusations and insults on social media that had me branded everything from a Bill Cosby-type date-rapist to a white man who cost a black woman her job. It was all based on absolute nonsense, so all of it was totally unjustified. I don’t mind taking responsibility for things that I HAVE done or things that I HAVE said, but this was made up. I’ve never spiked anyone’s drink, let alone a colleague twice my age.
The Huffington Post, Cosmopolitan Magazine, SABC, MTV Base, eNCA and other smaller publications joined in this slovenly mess by re-publishing the story as a fact. Not one journalist called me to fact check anything at all. Not a single one. When we talk about fake news, this is what we mean.
Our lawyers have asked for an unreserved apology and the Sunday Times are dragging their feet. To sell their tawdry paper, they’re happy to damage reputations. I’m not the first, and I won’t be the last. Sad state of journalism…..