What actually happened then? Many are still asking. You won’t find any juicy details about ‘spiking’ drinks in my book (as the Sunday Times have now admitted to being wrong about) – I only briefly mention this incident because it was highly publicized at the time. Ironically, I have written about the last article by the Sunday Times about me in January this year, by the same journalist, which didn’t paint me in the best light either. But what happened with Mara?
I sat next to Mara Louw on the Idols judging panel for several years and we shared many laughs and good times together. She was often cranky and we used to tease her about this but she was also the ‘mama’ of the show and I happened to be very fond of her. Here is a photo of Mara at a Heritage Day braai I hosted in 2010 before we set off to Idols in the evening – just one week before the Vodka incident. She enjoyed a drink now and again.
I can only remember one time when there was alcohol backstage at Idols. A crew member happened to have a bottle of vodka and poured some drinks in front of everyone, including Mara, who knowingly acepted. She went on to have something of a meltdown during the show. Only the next day, on a radio interview, she admitted to being on medication and said that I had given her the drink, blaming this for her strange behaviour. The press had a field day. End of story. Perhaps she was looking for someone to blame, rather than admit to being irresponsible about mixing medication and alcohol.
A YouTube clip of that incident is now circulating on social media and the Sunday Times concocted a story (six years later) that I admitted to ‘spiking’ her drink in my book that was released this week. How do things get so twisted?
Besides the trashy journalism we are witnessing and my name being dragged through the mud, this does not bode well for Mara’s legacy. I am saddened that an icon of the South African musical landscape will be remembered for one unfortunate incident. She did not lose her job at the time – she was back on the judging panel the very next week and regained her dignity. However, there were many more press reports about controversial things she had said in the following weeks. The fact that her contract wasn’t renewed when the season ended was a private matter between her and the channel.
Mara’s behaviour was unpredictable at times – there are many famous people who have had much worse public meltdowns but pick themselves up and go on to greater success. We’re all human. Young people could learn from Mara that it isn’t wise to drink alcohol if you’re on medication…and please take responsibility for your actions if you do.
Mara Louw remains one of the great singers of our time. She has performed at some of the most prestigious events both at home and internationally, as well as being a TV star. Mama Mara – the sometimes quirky but wise elder who we want to admire…that’s how we want to remember you. 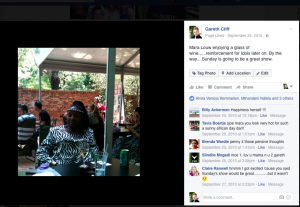