Hippies do the environment no good

Most sensible people accept that we’re abusive tenants of the earth. A few lunatics claim that the earth is impossible to exhaust and that it was given to us by some ancient deity who makes sure he replenishes all that we remove and recycles all that we add. 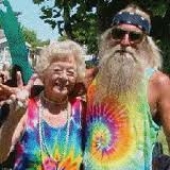 Unfortunately for the sensible majority, there are an extremist bunch of smelly, tie-dyed, dreadlocked layabouts who eat only plants (and some not even that) and imagine that they’re the only ones getting it right about the environment. They gather in glens, dales and other pretty open spaces and smoke weed, dance naked, have a lot of sex and condemn the rest of us for being ambitious. Hippies are not the ones most “in touch” with nature, they’re the ones most out of touch with reality.

The problem is that when reasonable people think about environmentalists they have a picture of these moron hippies in their heads, which does nothing credible for the very serious matter of climate change and conservation. So off-putting are these dirty hippies to the matter that we find ourselves willing to embrace the other, less sensible- but cleaner lunatics, in an almost reflexive way.

So please, hippies, go back to the 60s. You’re damaging a very good cause.