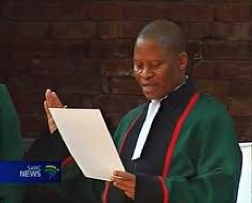 This past weekend saw our prospective Chief Justice face a grilling from the Judicial Services Commission in an attempt to ascertain his acceptability as the pre-eminent judge in the land. He acquitted himself more or less as well as he could, trying to talk his way around a few less than salubrious findings and a mysterious past on the bench in the North-West that had many people bewildered as to why his candidacy was the President’s preferred one. The most glaring problems with the defensive but not-unsmart judge were his admission that his had not “applied his mind” properly to a certain case (at least a miscarriage of justice then, surely?) and that he had received word from heaven that he was not only Jacob Zuma’s, but also God’s favorite for the job.

It is for those better versed in matters of jurisprudence, experts in separating the ratio decidendi from the obiter dictum to comment on the Judge’s inability to focus on the case in the first example, above; but voices in his head are things we might all be able to take issue with.

This is not another attack on general organised religion, or on this individual’s strongly-held beliefs, but it is a matter of great concern when the man at the apex of the judiciary is credulous and arrogant enough to assume divine providence is (at least one) of the reasons for his elevation. In a world of believers, who constitute by far the majority of the population, it is expected that many believers may rise to prominence, just as a minority of unbelievers will do the same. What is interesting is that in fields where intellect, reason, analysis and discovery are required, the majority of the candidates are overwhelmingly non-believers. Religion requires submission, the supposition that faith is more meritorious than rational thought, and the awkward juxtaposition of canon law and common law. This minefield is navigated by apologists with a great degree of mental dexterity, but the logic (or in legal terms, causal link) is never plainly apparent. Judges would never admit evidence on hearsay, or speculate about unscientific things like a virgin birth or miracle, unless they wished to be laughed out of court, and the profession. Yet all of this is what Mogoeng Mogoeng admits as one of his basic tenets. If religion is, as it must be for many judges, a private matter; then the judge has no business imagining (or telling us he imagines) that God wants him to be Chief Justice.

If a lunatic in a mental hospital tells us that a voice in his head, or from the ceiling fan, or from a pigeon at his window tells him to cut off the other patients’ heads, we place him under close surveillance and label him a menace to the rest of the hospital. This long before he commits any act to prove his willingness to submit to the imaginary voice. If a man says that God told him he would be Chief Justice, or that he thinks God approves of him taking that office, we consider it perfectly socially acceptable – because firstly, many other people labour under similar delusions and secondly because it doesn’t include any promise to do harm. Is there much difference though? Surely a delusion is still a delusion, even if many millions believe it? Being a majority view does not give that majority view any verity. Yet I hear the voices of the irrational saying how impressed they are by the man’s integrity and how credit must be given to his religion for the boon. If I believed my dog was telling me to take off my clothes and get in the trash, would you be impressed if I did?

I think the judge is probably a perfectly good person, likely an upstanding member of the judiciary and certainly connected to the appropriate political forces. I have no quarrel with his qualifications, I neither believe nor disbelieve the notion that he is intellectually shallow and I think the media have been, on the whole, unkind to him. My only concern is that, in the serious business of applying the law and defending the constitution, we can’t have someone who thinks that he can straddle the great divide between bible stories, canon law and heavenly approval or condemnation versus reason, evidence and precedent. They are mutually exclusive magisteria and the judge goes too far by bringing them into the same orbit so easily. In doing so, he reveals that his critics may be correct about his application of mind to the purpose.