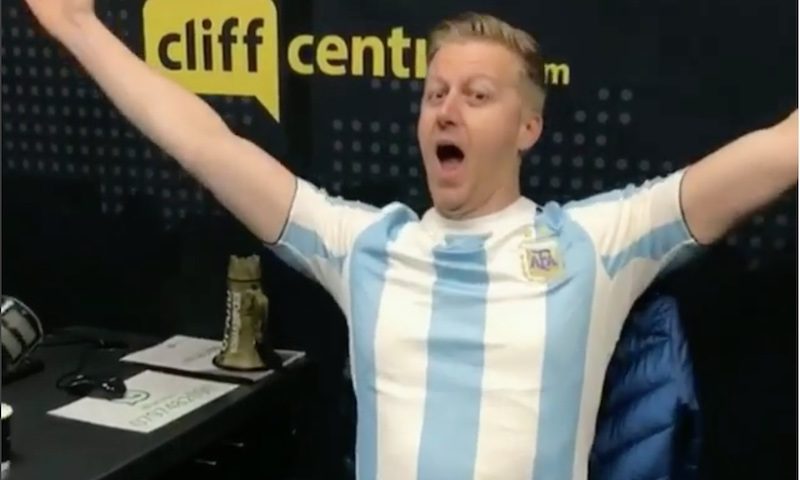 I love the World Cup. Since 1990, my brother and I have supported Argentina in the World Cup. It might have something to do with Maradona and his glory days, but for whatever reason that’s my team. That has never been a problem. People can support any team they like, right? There are guys in Lenasia who have nothing to do with England, Manchester or the colour red who are such passionate Manchester United supporters that they become annoyed when someone questions them about it.

I like the Argentine football team, no big deal. WRONG! When Argentina took on and beat Nigeria, I mentioned on Twitter that I was excited my team had won. Some tweeters decided this proof positive that I was racist for not supporting fellow African team. They also insinuated that they should decide for me which team to support. Does anyone else think that’s insane?

Something has happened to free speech – small groups of people seem to have decided that they’re more entitled to free speech than you. Some have gone even further than that – they think they should be able to tell you exactly what is and isn’t acceptable free speech. They have weaponised social media platforms like Twitter to bully individuals for nothing more than their opinions, and its time we reminded them what free speech actually is:

“Everyone is entitled to an opinion, right? Sometimes you will hear opinions you don’t like. Sometimes those opinions won’t be very nice. Occasionally an opinion will be completely wrong, even unacceptable. Sometimes the people expressing those opinions may even be assholes. Many who came before us paid with their lives so that you and I could talk as we do now, as equals, across continents and time zones. Throughout history people have been forced to fit in with someone else’s opinion of how things should work, but thanks to the Enlightenment, the abolition of slavery, the spread of democracy and the deconstruction of discredited ideas such as racism and patriarchy, as well as increased access to education and information, we are now universally able to voice our opinions. So freedom of speech isn’t free.”

Bigoteering is a term coined by podcaster and author Tim Ferriss. It’s what happens when someone disagrees with someone else and then bullies, excludes, or tags them as ‘racist’ or some other term they usually don’t deserve on social media. If you boil it all down it’s an intolerance of diversity of opinion. The results are also known as ‘doxxing’ or giving out the personal details, address, business relationships of the person you have a difference of opinion with. The practice began in about 2012 and is still a widespread practice among those who don’t like others to have different opinions to their own – a bigotry of ideas, if you will. Those responsible for this childish behaviour are the ones I referred to in my book as “social justice warriors”.

Last week we saw the unctuous self-immolation of model and influencer Shashi Naidoo, because she made some copy and paste comments about Israel that didn’t sit well with a small group of very vocal pro-Palestinian slacktivists online. I don’t want to pile on about how stupid it is to venture an opinion online without having any general or specific knowledge of a subject – Shashi has never proffered herself as a thought leader or intellectual – but I think she was torn apart in such an unforgiving way by the bigoteers that it deserves some attention:

Shashi was sent death threats, insults, threats of violence and her sponsors were bullied into dropping her like a hot potato. She went online, made a Kathy Griffin-esque apology, replete with wailing, tears, snot and running make-up – begging forgiveness over comments she hadn’t even really been that attached to when she pasted them into a status update. She followed this up with the spectacle of a press conference where she pledged to go on a ‘fact-finding mission’.

All of this happened because Shashi didn’t have the same opinions as people like Yusuf Abramjee – the self-appointed grand mufti of right and wrong and a man who recently trolled “shame on you Gareth” to me for expressing an opinion on the Israeli-Palestinian situation which brought forth a barrage of death-threats, insults, doxxing, threats of violence and my business was tagged – along with sponsors of ours – to bully us into submission.

Sarah Huckabee-Sanders, White House spokesperson, was forced to leave a diner in Virginia by a bigoteer restaurant owner because she works for Donald Trump. Of course it is every business owner’s prerogative to reserve the right of admission, and Sanders said she politely left, adding “I always do my best to treat people, including those I disagree with, respectfully and will continue to do so.”. The restaurant has now found itself the subject of boycotts from pro-Trump fans in the state. This will end up in a zero-sum game, and nobody will win.

Whatever happened to differences of opinion being the subject of great conversation and interesting debate, instead of a reason to ruin someone’s business, career or livelihood? Why did we let the internet change from being a place to share ideas and disagree politely with each other to a place where we destroy people who don’t think exactly the same as we do?

People are getting really tired of the hysteria – and it’s pushing people away from progressive movements and back to cold pragmatism and self-preservation – and in the worst cases away from good progressive ideas. The humourless, politically-correct bigoteering of the left is going to push us all further apart, chase important dialogue into the shadows and result is a stultification of intellectual honesty and discourse. I encourage anyone who sees or hears this blatant bullying online to do the right thing – and mute and block the high-priests of opinion before they come for yours.