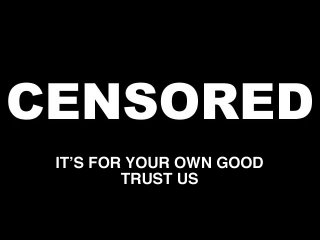 They’re doing it again. The moral police are making decisions for you and I that they’re in no way entitled to make. I quote here from the Star Tonight of January 28 2012:

Religious organisations and civil society welcomed the Independent Communications Authority of SA (Icasa) ruling on Friday that there would be no pornography on pay TV in SA. Icasa spokesman Jubie Matlou said it was decided that women’s right to dignity outweighed TopTV’s right to freedom of expression, and the rights of viewers to receive pornography on television. The Apostolic Faith Mission of SA said on Friday night it was both relieved and delighted that Icasa took the valid concerns of citizens into account. Isak Burger, its president, said: “(The) government must act decisively to protect society’s most vital institutions – marriage and the family.” He added that thousands of children were being exposed to sexually explicit images, and called on the government to introduce legislation to eradicate the proliferation of pornography on TV and the internet. The SA Muslims Network also welcomed the ruling, with chairman Faisal Suleman confirming they had made a submission to Icasa opposing the application. Childline’s national co-ordinator, Joan van Niekerk, said the ruling indicated Icasa’s awareness to protect children. The Family Policy Institute (FPI) described Icasa’s decision as “socially responsible”. Institute director Errol Naidoo said it was a “bold decision” that placed the health and welfare of the family above the profit motives of irresponsible broadcasters. “The South African public’s overwhelming opposition to pornography on national television is now a proven fact,” he said.

Well I beg your pardon, but I don’t think they consulted me or anyone I know, even vaguely. The Apostolic Faith Mission? The Family Policy Institute? The SA Muslims Network? Who are these people and why are they making decisions on my behalf about what I can and cannot see on my television in the privacy of my own home? How dare these people have the temerity to act like an authoritarian censor and determine, from an unqualified position what is appropriate viewing for free adults in a liberal democracy? It makes the debate about the Protection of Information Bill seem positively lowbrow.

The Apostolic Faith Mission and the like, regularly citing the protection of children do not insist on the same right children have to not have their little minds poisoned by their parents or church when it comes to having Jesus Christ foisted into their happy, guiltless pre-pubescence. Instead they will wail about the prevalence of sexual imagery and foul pornography all around their precious children. Let us not forget how these children came to be. Their parents fucked them into existence, using methods not unlike those in the porn films they so loathe. But that is to digress. The fact is that every child will eventually encounter porn, hopefully later in life and hopefully in a healthy way. To pretend that an adult pay-per-view code-locked TV channel will be their first port of call shows just how out of touch these old trouts are with teenagers, modern technology and modern communication. The genie has been out of the lamp since the most ancient of civilisations and you will not force it back in. Children must be raised with healthy attitudes to sexuality and sex and their parents should take care to remember that this duty is theirs alone. No law, Communications Commission or TV channel board member is empowered to raise your child.

So Errol Naidoo, Faisal Suleman, Isak Burger and company, I ask only this: Since I don’t force you to remove stupid religious programming from my television, even when it borders on the ludicrous and offends people like me deeply (like the evangelical Sunday programs which fraudulently purport to demonstrate faith-healing and deeply patronising Muslim programs about a woman’s place in the home); since I don’t infer that your bogus imaginary friends Jesus and Mohammed are an affront to my childrens’ right to be told the truth on television; and since I don’t even need to put a code in to unblock this drivel – all I ask is that you let everyone else watch what they like, and you watch what you like. Nobody has any right to extend their magisterium any further than that. The detritus of religious moral preachment has only shown us one thing – that if morality is left to the religious they will usually do the wrong thing, and do so with divine warrant; and those of us who believe that freedom and decency come not from what you watch or read or learn – but from how much you respect the rights of your fellow man are almost always the ones history favours.